It is so sad to see a company close their online store. Top Dog Dies has shut down. They had some wonderful Die sets. I wish I had stumbled across them sooner. I was lucky enough to scoop up a few one of which I used to make the following card. 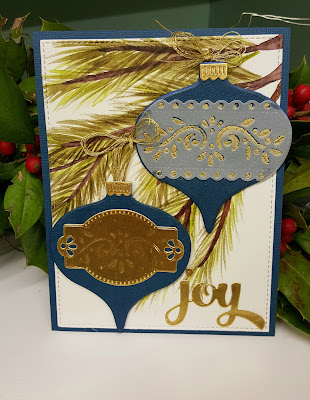 I pulled out a piece of water color paper and some MFT inks ( Hot Fudge, Jellybean Green, and Olive) and painted some pine boughs with my aqua brush. I wanted to do something a little different so I took the scalloped die and cut a stencil using the plastic piece from a pack of bacon and ran them trough the Big Kick. I then cut the rest of my pieces from the various card stock. Taking the stencil I made I laid it on the blue ornament an colored the cut outs with an embossing pen and heat embossed it with WOW Gold Rich EP. I finished this one up by aligning the piece of vellum over the embossing and adding the top of the ornament. For the other ornament I used the same stencil but put it on top of the gold piece that is shaped like a label and dry embossed some detail in it. I adhered this piece along with the top of the ornament. both were popped up on fun foam. I wanted them to look like they were hanging from the branches. I used some DMC floss poked a hole on each side of the branch and lace it through then tied a bow. The two ends I glued behind the ornament so it looked like a loop. The last thing I did was cut out joy from MFT Shiney Gold card stock using Reverse Confetti's Winter Words die and assembled my card.. 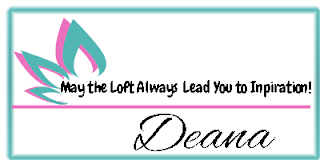 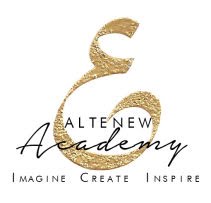